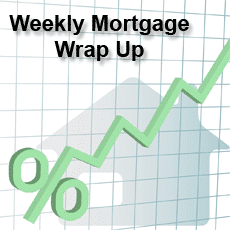 Today saw mortgage rates move higher after better than expected employment data was released by the Bureau of Labor Statistics. Their data shows that 163,000 jobs were added last month, the highest level of growth since February.

Data was also released showing that the unemployment rate rose to 8.3 percent from 8.2 percent in June.

These data were better than expected, causing the markets to rally.

Mortgage Rates and the Week Ahead

Next week will see very little economic data being released. This means that even more attention and focus will be on Europe as it continues to work through its issues. Expect significantly good or bad news coming out of Europe to move mortgage rates, as usual.

While this week breaks the downward trend of the past 7 or so weeks, the rise in rates that we’ve seen is not strong enough to mark the end of low mortgage rates or the beginning of a significant increase in mortgage rates as it stands today. Many market watchers are expecting sideways movement next week barring dramatic or unexpected news coming out about the health of the American or European economies.

Economic Calendar for Week of August 6, 2012