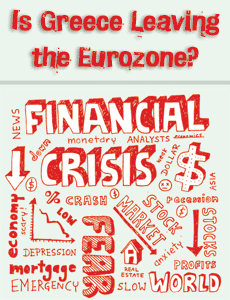 Today saw mortgage rates move noticeably lower than yesterday and close near all time lows. This comes after a slight rise in rates yesterday that was triggered by continued talk of possible international steps that might be taken in order to stimulate international economies.

There are some big events that have strong potential to move mortgage rates this weekend and next week. This weekend will see Greece have an election that may determine whether or not Greece stays in the Eurozone, depending on which party is elected.

If Greece opts to leave the Eurozone, it will be an extremely negative event for the Eurozone as a whole. It will be yet more confirmation that the health of the Eurozone is as bad as has been previously feared. It will also exacerbate existing known financial issues being dealt with in Italy and Spain. Additionally, it will be one more step towards a worst case scenario of a Eurozone break up.

Look for mortgage rates to take a nice dive if in fact Greece opt to leave the Eurozone.

Next week will feature a large amount of economic data being released that will help Wall Street understand more about the state of the health of the United States Economy. Additionally, market watchers will also be waiting for the FOMC (Federal Open Market Committee) announcement that will be occurring on Wednesday.

This is a high impact event for the markets and has high potential to move mortgage rates and the markets as a whole. Market watchers are on the fence as to whether the FOMC will implement QE3 or a third round of quantitative easing.

Next Post Mortgage Rate Outlook for the Week of June 18, 2012

October 27, 2016 Ginnie Mae Fannie Mae And Freddie Mac – Is There A Difference? Read More
August 15, 2013 Joint Mortgages: The Pros and Cons of a Joint Mortgage Read More
March 3, 2016 Veterans Administration Loans And What They Can Offer Read More